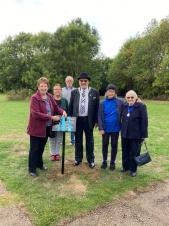 Today the mayor Cllr John Farrar and his consort. Cllr Caroline Cross and residents were present when the daughter of Les O'Dell unveiled a plaque in his memory at the park that is named after him.

Les O'Dell was the last allotment owner before it was turned into a park.